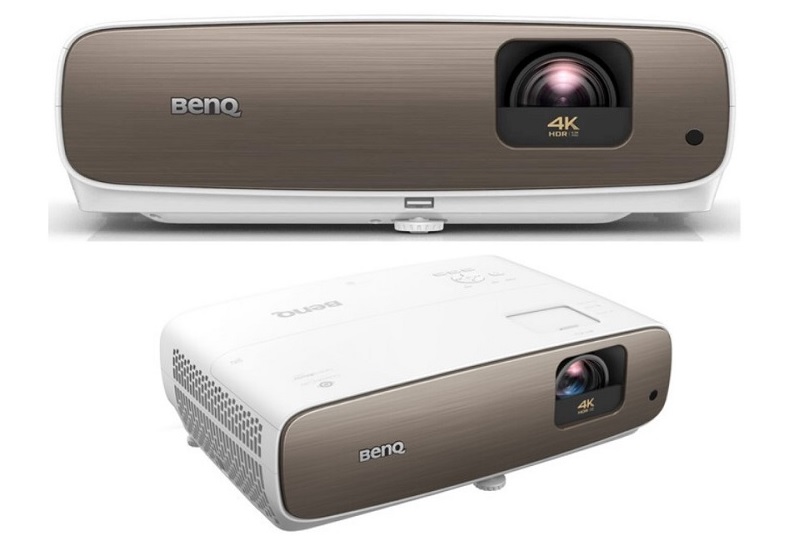 When you don’t want to comprise on image quality, you need a 4K projector. Colors are accurate and bright, while onscreen images are stunningly detailed. You feel like you are at the theater when you add in the image size. With the right screen and lens distance, you get 100” images and even larger.

BenQ is known for producing 4K projectors with innovative color technology. Their lens array is also designed to produce theater-quality images. Two BenQ 4K projectors are the HT3550 and the HT3550i. At first glance, it seems like the two models are the same. Image quality, lumens, and built-in speakers are identical. However, there are differences.

Comparing the two projectors, you’ll notice that one comes with more features. The HT3550i boasts more connectivity, along with an easier-to-operate interface. Even though this sounds great, it still helps to take a closer look at both projectors’ specifications. (>>> Find on Amazon)

Image quality is the same with both BenQ projectors. Both have 4K resolution and a 2,000 lumens rating. You get a bright, dynamic picture no matter which model you take home. The differences appear when you’re comparing the included features.

You can stream content from your favorite apps with the HT3500. However, you need to plug-in a Fire stick or other streaming device. The 4K projector doesn’t come with onboard streaming, but there are HDMI and USB ports to support the devices.

It’s easier to stream Hulu. Prime, and other content with the HT3550i. It comes with an Android interface. You can go to Google Play and download your apps. The projector also supports Chromecast and Airplay. You can mirror content from a connected mobile device directly to the projector.

Ease of Installation and Use

Vertical lens shift and 1.3x zoom ensure you won’t have problems aligning or focusing images. You need around 8.3 feet of space between the lens and screen to cast 100” images with both projectors. Along with a flexible installation, both projectors are table or ceiling mounted, they are also surprisingly lightweight at a little over 9lbs.

What makes the HT3500i easier to use, is its voice search features. You get all of the features included with Google voice. Along with searching for movies and shows, you can also check the traffic and weather.

You do get more with the HT3550i when it comes to features, but it also has a slightly higher price tag. It’s only a little more than the HT3550, but if voice assist and other functions aren’t a top-selling point for you, it may not be worth the added expense.

With a 10-element glass lens array, you get sharp, clear images. The HT3550 is a native 4k projector with 4x the resolution you get in an HD projector. You’ll immediately notice the difference if you’re upgrading from 1080p to 8.3 million pixels per image.

Colors are vivid and accurate across the spectrum. The projector has a 6-segmented color wheel and HDR10 support. It’s also compatible with HLG technology. You also have the benefit of DLP technology. The color spectrum is expanded up to 50% producing more accurate and brighter colors than what you get with the standard Rec. 709.

A flexible installation makes the HT3550 easy to setup. Lens shift and digital keystone correction make for simple image alignment. You also have manual zoom and other options to fine-tune color and brightness.

There are downsides to the HT3550. It’s not a short-throw projector. You need 8 – 10 feet for 100’ images. The 2,000 lumens rating is another issue when you’re using the projector in brightly lit rooms. Colors will appear faded and images less detailed.

The HT3550i has the same advanced color technology as the HT3550. Colors are realistic with crisp blacks, and rich details. You get an immersive picture and combined with a 100” screen, you’ll feel like you’re watching movies at the cinema.

What sets the HT3550i apart is its connectivity options. The Android TV interface is easy to operate. You can also download apps from the Google Play store. The projector is also compatible with Android and Apple devices. You can mirror cast from the mobile device to the projector.

There is a downside, Netflix is not available in the app store. You’ll have to use a streaming device to watch content from the streaming service. It’s not a big deal unless you’re paying the extra money only for built-in streaming.

Even though the HT3550i isn’t a smart projector, it comes close with Google voice assist. You are lacking a few features like playback, but you can search for content. You also have a few other features like weather and traffic updates.

It’s almost impossible to compare the BenQ HT3550 vs the HT3550i. The difference shows up when it comes to convenience. The HT3500i comes with built-in streaming and voice control. It’s a breeze to use the Android interface, making it a great 4k projector for first-time users. (>>> Check on Bhphotovideo)

The HT3550 may lack streaming capabilities, but if it’s not important it is a better value. You get the same great picture at a lower price.