There’s more to image quality than getting a top-rated projector. Your projector is responsible for producing the images, but what they appear on also affects quality. Blank walls are great for impromptu movie nights and there are home projectors designed to work with all types of surfaces. However, you may be losing optimal image quality.

When you want the best picture from your protector you want to use a dedicated screen. Colors are brighter with more contrast. Details are also sharper, but which projector screen should you get? You have a choice between a black projector screen or a white one so which gives you the best image quality?

You have options when it comes to projector screens both in size and brand. You also have to decide which is better for your viewing habits, a black or white projector screen. There are differences between the two that will affect image quality.

Why Use a White Projector Screen 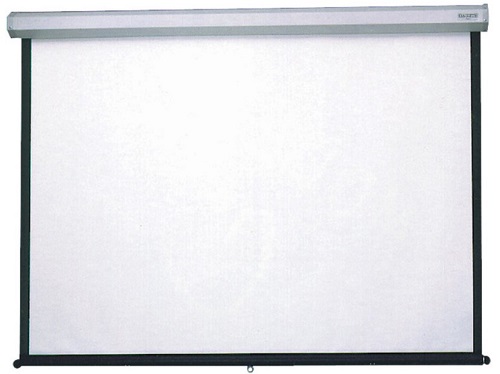 White screens are the standard. They are the first screens developed for use with projectors, which means you have several options at varying price points. You can find budget-friendly ones that display bright images, along with higher-priced screens that boast a few convenient features like tiny perforations designed to allow audio waves to flow through. You can place your speakers behind the screen for a true cinematic experience.

The light-colored screens do give you bright images with colors as accurate as the projector can produce. You also won’t have any trouble finding a white screen. While this does sound perfect for your home, the screens also have a few downsides.

Reflecting light is a common problem with white screens. You’ll need a projector with a high lumens rating to counteract the issue. The other options are to darken the room or to only use the projector at night. Contrast is something else to consider. It’s not as sharp with a white screen unless the projector boasts a high dynamic contrast ratio.

You may save money buying a white screen, but you’ll find you’re spending more on a projector that comes with a bright lamp and higher contrast.

Why Use a Black Projector Screen 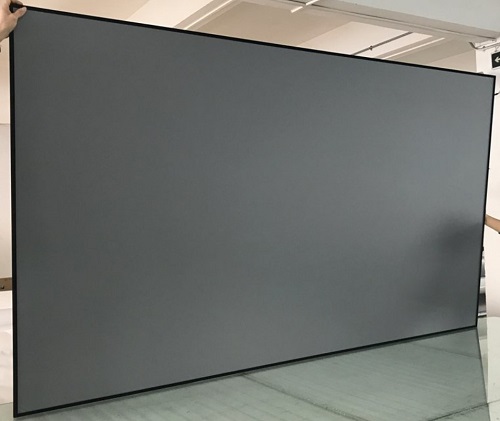 Black projector screens have been gaining in popularity over the last few years. They’re relatively new to the market so the selection is limited. The screens are also priced higher than most white ones, but they do come with certain advantages.

The contrast is improved on a black screen even if your projector doesn’t have the highest ratio. You’ll get brighter on-screen colors whether there’s ambient light in the room or it’s completely dark. You may pay more for a black screen, but it often evens out when you don’t have to buy a projector with a high lumens and contrast rating.

The dark-colored screen does help solve problems with image clarity, but it also doesn’t mean it’s perfect. You should expect to do some fine-tuning on your projector. Black screens have two common problems.

Hot spots, where a section of the screen is brighter, is annoying. You might also notice a rainbow effect. Some people aren’t bothered by small rainbows or bright spots, while others won’t be able to concentrate on the movie. Most of the time, these two issues are fixable. You’ll need to adjust the settings on your projector. It can take some time to get the image quality where you want, and not everyone wants to adjust their projector every time they use it.

When it comes to black projector screens vs white ones, it depends on your budget and viewing habits. Black screens are more expensive, and your options are limited. You do get brighter on-screen images with the lights on or off. You may also save a little money on the projector since you don’t need a high contrast ratio or the brightest lamp. The main issue is having to readjust the projector’s settings.

White projector screens are more common, and affordable. However, if your projector doesn’t have great contrast or a bright lamp, the screens typically perform best at night. The main advantage with these screens, is you rarely have to adjust your projector to improve image quality.

When it comes to choosing between the screens, consider your budget and viewing habits.