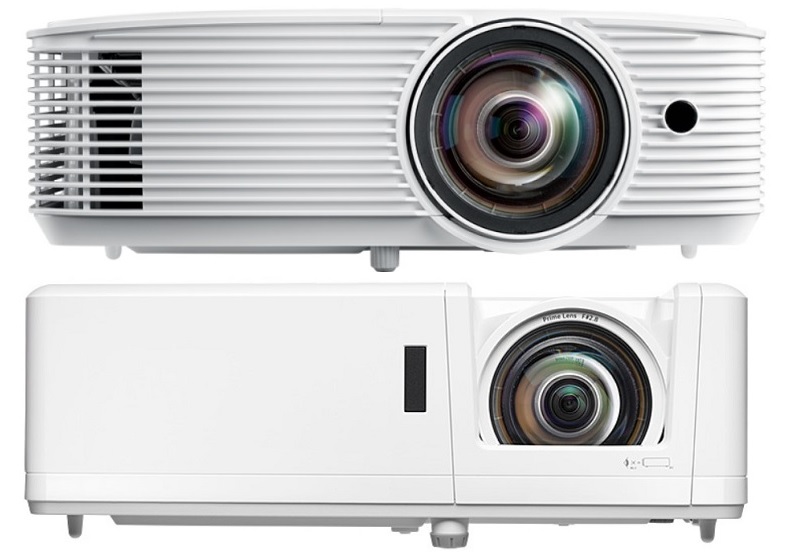 Optoma has produced some impressive home cinema projectors that include its GT line. These projectors boast a flexible installation and come with plenty of features designed to improve your at-home viewing experience.

Two projectors in the line are the Optoma GT1080HDR and GT1090HDR. You get sharp, crisp images and versatility with both models, but when you’re comparing the two you’ll notice some differences.

The GT1090HDR produces a brighter picture, and it’s easier to setup. It’s also has a longer-lasting source. (>>> Find on Amazon)You may never have to replace the laser light. Gamers will want to take another look at the GT1080HDR. It has an input lag that won’t slow down your graphics-rich games.

It’s not easy choosing a projector when both offer many of the same features. Here’s a closer look at both Optoma models so you can make an informed decision.

How images look onscreen is key when you’re looking at home theater projectors, and neither one will disappoint you. You get HD resolution and HDR10 support for bright, detailed images. The GT1080HDR has a 50,000:1 contrast ratio. Blacks are rich, even when the lights are on.

Even though you can’t complain about image quality with the GT1080HDR, you do get a brighter picture with the GT1090HDR. It has a higher lumens rating at 4,200, compared to the 3,800 lumens from the other Optoma projector. The 300,000:1 dynamic contrast ratio is also a noticeable difference, especially between blacks and whites.

Gamers finally have two projectors to consider. Both have low input lags capable of ensuring smooth frames without any blurring. With the GT1090HDR in gaming mode, latency speeds drop to 16ms. However, input lag drops to 8.4ms with the Optoma GT1080HDR. Add in the fast refresh rate and all of your games will play smoothly.

The throw-distance is the same for both projectors. You only need a foot or so of space between the lens and screen to enjoy 100” images. Digital keystone correction and zoom make it easy to center the picture.

However, the GT1090HDR does make it easier to align the onscreen picture. It has instant corner correction that automatically centers the image. All that’s left for you is to fine-tune the picture to your preferences.

The Optoma GT1080HDR is an affordable short-throw projector. For less than $1000, you get vivid, immersive images. A 6-segmented color wheel gives you natural, realistic onscreen colors. Full HD resolution ensures images are crisp and detailed. The dynamic contrast ratio is a little low, but blacks won’t appear faded in ambient lighting thanks to the 3,800 lumens projector lamp.

Installation is quick and easy. With one-foot of space you can throw 100” images. Move the projector 4-feet away, and the image size jumps to 120”. At 7.7lbs, the projector is surprisingly lightweight. You can easily move the projector indoors or outside. Digital vertical correction and zoom ensure onscreen images are always centered.

The GT1080HDR is billed as a gaming projector, and it lives up to its advertising. When it’s placed in Enhanced Gaming Mode, input lag goes from 16ms to 8.4ms. Multi-player shooter games play smoothly. Even graphic-rich games won’t slow down or have blurry images. Click here for more detailed Optoma GT1080HDR review

You will pay a little more for the Optoma GT1090HDR, but you do get more for your money. The long-lasting 4,200 lumens laser light source produces bright images during the day and nighttime viewing. Ambient light is rarely a problem with the GT1090HDR. A high dynamic contrast ratio combined with HDR10 technology ensures onscreen colors are brilliant and true to life.

Connecting your external devices isn’t a problem. Along with USB and HDMI ports, you also have inputs for audio and 4K content. The GT1090HDR also supports 3D images. Watch all of your streaming content from almost any device.

Weighing 10lbs, the projector is light enough to move around as needed. It’s also ready to go with very few adjustments. With 12-inches between the projector lens and the screen, you can sit back and enjoy 100” images. When you can’t center the projector in front of the screen, don’t worry, image alignment is a breeze.

Digital vertical and horizontal keystone correction easily aligns images. You also have digital zoom, along with the 4-corner correction. The convenient feature automatically centers the image, so all you have to do is make a few minor adjustments. Our more detailed review of the Optoma GT1090hdr

It’s not easy comparing the Optoma GT1080HDR vs the GT1090HDR. The projectors have several of the same features in common. However, there are a few important differences. Overall, the GT1090HDR does come out as the winner (>>> Check the current price on Bhphotovideo). It has a brighter picture, is easier to install, and supports both 4K and 3D content. The downside is the slightly higher price tag.

Gamers won’t mind the lower lumens rating or contrast ratio on the Optoma GT1080HDR. It has an input lag of 8.4ms, making avid gamers ecstatic. It’s also hard to beat its affordable price.

When it comes to making a decision, think about what you want from a short-throw projector.