It takes more than a big TV and a soundbar to make a great home theater room. You also need to take into account the screen you use, the room color, and how much ambient light can enter your theater room during the projector’s use. The most important thing, though, is a high quality projector. For this article, we will compare the VAVA 4K UHD vs. the Optoma CinemaX P1 4K UHD laser projectors.

The best projector for your home theater may be different from the one that works best for your buddy’s. The conditions that surround the projector’s operation, room size, lighting differences, and so on, need to be taken into consideration. So let’s examine the features that we feel are important to a projector’s operation and see which of these two projectors may be right for your home theater.

Although there is a somewhat substantial difference in price between these two projectors, it is our opinion that spending the extra money for the Optoma CinemaX P1 is the way to go. Read on to find out why.

Contrast/Brightness – The whole idea of a projector is to take a small image and turn it into a much large one. It takes a certain amount of light, measured in lumens, to do so. Contrast is the difference between the whitest white and the blackest black. It is expressed as a ratio like 1,000:1, 2,000:1, and so on. The higher the first number, the better the contrast.

Color Accuracy – there is nothing worse than off-color reds, greens, and blues. A great projector needs to produce accurate colors and should have adjustment capability so that it can be “dialed in” to account for room color and ambient light bleed through doors and windows.

Low Noise – projector components whirl and cooling fans spin. There will always be a certain level of noise associated with projectors. Obviously the lower the noise levels, the better. In a movie’s silent moments you don’t want to hear a bunch of projector noises. 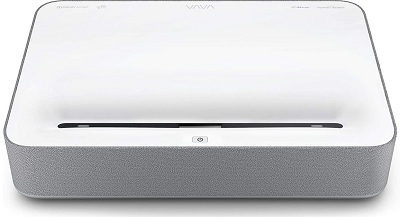 The VAVA 4K is an ultra short throw projector that can be placed directly in front of the screen. At a distance of only 7.5 feet, it can fill a 100” screen. It projects a bright image in larger rooms at a 3,000:1 contrast ratio. Being an ultra short throw, the VAVA 4K doesn’t require you to mount it on the ceiling in the middle of a room. >>> Check current price on ProjectorScreen

Many theaters use VAVA projectors, so having one in your home is better than going to the theater (unless you crave movie theater popcorn). It’s also inlcuded among top laser projectors

The Optoma P1 has a great looking design, a black with gold-accented color case, and weighs in at a hefty 25 pounds. Instead of a LED or bulb, the P1 uses laser light. It is an ultra short throw projector that can be placed as close to the screen as 15 inches and still project an image larger than 100 inches. >>> Check current price on Amazon

Because the P1 can be set very close to the screen/wall, it projects upward at a steep angle and will show every imperfection in whatever you are using for a screen. It is recommended that you purchase an ALR/CLR (ambient light rejecting/ceiling light rejecting) screen for the best image quality and if you do, the image will be stunning.

Both of these projectors produce a sharp picture on large screen formats. They both also have impressive ultra short throw ratios. The Optoma CinemaX P1 has less of an input lag, so if you do any gaming it will be your better choice. It’s still a little slow for fast-paced action, but it is superior to the VAVA 4K.

If your selection comes down to budget limitations, the VAVA 4K is a fabulous choice that you will be satisfied with. If you can spend the extra money to acquire the Optoma CinemaX P1, however, that would be the way to go.

Combining a short throw projector with laser technology will get you a sharp, clear picture image on a large screen. As an added bonus, the lasers will outlast and out-perform regular, lamp-based projectors. Either of these two will work great, we just feel that the Optoma CinemaX P1 is worth the extra cost (check it on Amazon).