When it comes to home theater screens, the projector offers you a variety of different options that will all work, although some may work better than others. So what specifically can you use for a projector screen? Let’s explore the many options and see what might work for your home entertainment theater.

DIY Options to Use as a Projector Screen

The first option is also one of the cheapest, a blank wall. It should be a white wall, so that is where any cost may come in. Your walls may be a color or an off-white color. In that case, you may have to buy a can of white paint to paint the wall with. Try not to use a textured wall, as any unevenness (texturing) will cause image distortion. Some people have used a blank wall and built a frame around the screen area to fancy it up and define the edges of the projected image.

A second inexpensive option would be to use a clean sheet. You may already have one and if not, it doesn’t cost much to buy one. Once again, white is the color you should use. A good thing about using a white sheet is that it is easy to relocate if you decide that today you want to watch something in a different room or even outside. It doesn’t even have to be a bedsheet. White cloth of any kind will work as long as it has a smooth finish. When using a sheet or piece of cloth, you may need to place something behind it to keep the projected image from shining straight through it and not being reflected back towards the viewers. The image may look washed out if it is not reflected back properly.

Option number three is to actually paint a surface with projector screen paint. This special paint allows the painted surface to reflect light the same way a specially designed screen would. When we considered using a white wall, if you would use screen paint you would not lose any image quality at all. Manufacturers recommend painting two coats of this paint to ensure the surface is properly covered. The drawback with screen paint is its cost. One gallon of screen paint can cost as much or even a bit more than an entry-level projector screen itself. 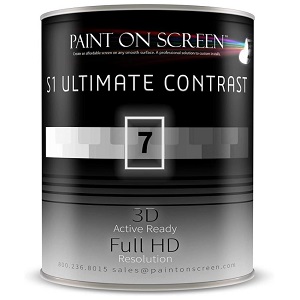 Manufactured Screens That Can be Used for Home Theaters

While the above options will all work satisfactorily, a decent screen designed specifically for home theater projectors will help you get the most out of any projected image. Now let’s look into the different screen types available on the market and why one of them may be a better choice for your projector.

A manual screen works like a window shade. You roll it down to use it and roll it up when it isn’t needed. These screens can be tensioned or non-tensioned. Tensioned screens are “stretched” between the top and bottom of the screen to keep it as flat and still as possible. Non-tensioned screens just hang from a top bar and are more apt to move or flex if disturbed by an air current.

Electric screens are similar to manual screens and also come tensioned and non-tensioned. The difference is that they have an electric motor to lower or raise the screen.

Rear-projection screens are also available. Your projector must be setup behind the screen and the projected image comes through the screen to the viewer. The space between the projector and the screen must be kept extremely dark. Most home theater rooms are not designed for this type of screen.

There are even inflatable screens that can be used indoors and outdoors. They are not meant to be used for a permanent installation but can be setup and taken down as needed.

Using Screens of a Different Color

Projector screens have a tradition of being white. That was until 2001 when Stewart Filmscreen introduced their gray-colored Grayhawk screen. Since then gray screens have become popular.

White screens perform brilliantly in darker, light controlled rooms. If you can eliminate almost all light sources, a white screen will deliver outstanding performance. Also, if most of your projector viewing is sporting events a white screen is great to use. Sporting events are usually bright and do not have deep, darker colors so white screens work beautifully even when used in some ambient light situations.

Gray screens are considered to be “high contrast” screens and are light to medium shades of gray. They will help boost contrast on digital projectors in rooms that are not totally dark. The gray color absorbs ambient light and produces darker blacks, which benefit contrast levels. When considering ambient light, you have to ask more than are the windows completely shaded. The colors of furniture and other reflective surfaces in the room also have to be considered.

What Can I Use for a Screen?

The answer really comes down to personal preference. You can use a wall. You can construct a screen as a DIY project. Or you can choose a manufactured screen of several different types. It’s your home theater; you must decide what will be the best option for you. If you opt to spend next to nothing on your screen, a white wall or sheet will work just fine. However, you spent a good deal of money purchasing a projector, why not buy a screen that will deliver a higher quality image. In the end, though, it’s up to you.